Pump-probe photoemmission experiments on Dirac states in graphene have demonstrated the existence of a broadband population inversion, a situation when highly excited electrons and holes form two independent Fermi-Dirac distributions with separate chemical potentials. The lifetime of population inversion in graphene is of the order of 100 fs. Population inversion has also been demonstrated in three-dimensional topological insulators (3D TIs) with much longer lifetimes, ranging from few picoseconds (ps) to hundreds of ps. Much less is known about the dynamics of photoexcited carriers in 3D DMs such as Dirac and Weyl semimetals, although examples exist.

We searched for transient excitonic instability in optically-excited DMs with population inversion which allows the optical tunability of the density of states (DOS) of the electrons and holes, effectively offering control of the strength of the Coulomb interaction. In 2D, this tunability is unique to DMs and is not available in metals or semiconductors which possess a constant DOS at low energies. At low temperatures, electron-hole pairs condense to form a superfluid phase known as an excitonic insulator. Due to the non-equilibrium nature of electron and hole populations in pumped systems, we refer to this collective state as a transient excitonic condensate. Due to the tunability of the effective coupling strength, transient excitonic condensates in DM may occur at temperatures that are orders of magnitude larger than in systems studied previously. 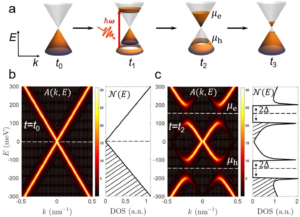 The critical temperature and the size of the excitonic gap in optically-pumped DMs is controlled by the interplay between the enhanced DOS at the non-equilibrium chemical potentials and metallic screening, which grows with the chemical potentials, the value of the coupling constant and the Dirac cone degeneracy. Based on this we can identify the best material candidates for observing the transient collective states, and the signatures of the transient excitonic condensate that could be probed by scanning tunneling spectroscopy, photoemission and optical conductivity measurements.

Among existing DMs, we predict the largest effect, a gap on the order of 10meV and a critical temperature of 70K, in undoped suspended graphene in which optical pumping is realized selectively on a single valley, e.g. using circularly polarized light. Such gap sizes are large enough to be detected by angle-resolved photoemission spectroscopy (ARPES). 3D TIs with a single Dirac cone and long-lived photoexcited states are also promising candidates, with gap sizes of a few eV and critical temperatures of tens of K.